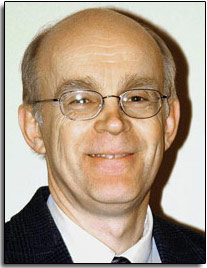 When people in the churches hear what is coming before the Evangelical Lutheran Church in America Churchwide Assembly in August they often ask: “How can anyone believe we should make such a change when the Bible is clear?”

Allow me to offer an opinion about that, after wondering myself for a long time now.

First, if we assume those who would change our ministry standards are completely unbiblical in their approach, we are mistaken. Listen and you will often hear them talk about being prophetic, and about “justice issues.” Their biblical platform is to a large extent the Old Testament prophets. Not the Isaiahs or Jeremiahs as much as the Amoses and the Hoseas. Making the huge mistake of believing anyone can be called to the prophetic ministry by desire, rather than by call, they have set out to be prophets, and prophets as they understand them must have someone evil to oppose. That would be us.

There is another understanding of the prophetic ministry that makes it above all the proclamation of the Gospel. In that respect we are all prophets, as Joel 2:28-32 put it, followed by Peter in Acts 2:17-21, “I will pour out my Spirit in those days, and they will prophesy.” (Acts 2.18b) But “the prophetic” for many in the ELCA now seems to mean “the political.”

Another biblical contact point for those who would change the ministry standards is their criticism of Pharisees. Pharisees are understood by them as any people who quote some tradition of the elders and oppose the changes Jesus would surely want to make. Pharisees are said to be hypocritical and not to be respected for their different points of view. They would say that you can spot Pharisees; they are always the ones against change. Again, that would be us.

Why do I so often sense a judgmental anger among people whom I know want the ministry standards changed? How do people who are at least nominally Lutherans have such little difficulty condemning others as sinners whose beliefs about homosexuality don’t match their own? I truly believe a substantial number of people in ELCA leadership circles believe the denomination would be far better off without its conservatives, or, to them, Pharisees. If so, they are not particularly concerned that the ELCA might split this summer. In fact, they may hope it does! The Pharisees would be gone!

It is important to try to understand how others think. Only in that way can we work out differences and reach agreement. If others in the ELCA think about us as I’m afraid they do, reaching agreement doesn’t look promising.