God will not be mocked— especially when steeples fall 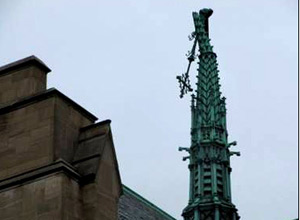 Some things are not up for a vote.

Some things we as creatures do not have the right to even think we can change.

We as creatures have forgotten our place. Instead of prostrating ourselves face down on the ground before God, Our Father and Our Creator, in humble obedience and prayer, the Evangelical Lutheran Church in America—as a shrinking “sideline” denomination—decided to continue its in-your-face unfaithful and disrespectful conduct toward God, Our Maker, ignoring all interventions, warnings and signs.

The ELCA put God’s Word and all of its teachings on the natural order, marriage and family up for a vote and the result was a resounding 66.67 percent approval for changing them.

How many times has the WordAlone Network called foul? How many speeches, articles, news releases have we put out trying to be clear but not angry—pointing out that the natural order is not up for a vote.

God is God, and He will not be mocked.

Yet, year after year the agenda gets pushed, assembly after assembly it gets more in our faces until this year, in this assembly, here in the city of the headquarters of one of the predecessor bodies, the old ALC (American Lutheran Church), things were different.

One could hear it, feel it, and just simply know it . . . this was the year that the ELCA was going to actually cross the line as an institution and make clear to those with ears to hear that it is not an orthodox Lutheran Christian church. The ELCA is a misguided, unfaithful, social institution giving birth to a new religion that only gives lip service to Jesus and His Word.

It is difficult to express to all of you the happenings of the past few days as things began to build up and fall down (go ahead and envision the Tower of Babel).

As a former missionary who served in Tanzania, East Africa, I prayed, watched and hoped that the visible nature of God as I had experienced Him there among the faithful Lutherans in Tanzania would be revealed this week.

In East Africa they have not yet gotten sucked in by this post-modern era to believe that being enlightened means being smarter than God; who still regard that as a First Commandment violation; who know that spiritual warfare is a reality and that Satan is not only real, as the Bible is so very clear on, but targets those whose witness will damage his kingdom. These faithful live, pray and worship differently.

The African Christians knew that I firmly believed that the storm that shook the convention center in Orlando back in 2005 and flickered the lights as the ELCA furthered its agenda to put God’s Word, the created order and its entire teaching about what is to be blessed and ordained up for a vote, came from the hand of God. The ELCA pushed on, as if there would be no consequences.

In addition to being told by more than one speaker that we are guilty of the unforgiveable sin, I listened in disgust to racist comments made against the growing, vibrant Lutheran church in Tanzania. I heard the story of Philip and the Ethiopian eunuch twisted and misused as concerned Ethiopian ELCA members, including a former bishop and Lutheran World Federation vice president, from the very church that the presiding bishop held up in his report as an example because of its multi-cultural nature and fast growth, were escorted from the convention center because “the paying customers were complaining.”

As one volunteer gathered money to buy these faithful witnesses visitors passes so they could continue to tell their story to the voters in the halls and on the sidewalks, hoping that if the voters won’t listen to those of us they have already written off they might, in their great push for inclusivity, listen to those praying and begging that the ELCA not take this fatal step. But ears were stopped up and hearts hardened.

As I told another ELCA Ethiopian pastor on the phone hours before the vote, we are going to make God very angry, and I only hope and pray that in the face of this sinfulness and the work of the Evil One He will act more like He does in Africa. We need another storm like the one in Orlando and maybe this time someone will heed the warning.

Yes, this happened. As speaker after speaker twisted God’s Word to say that we, the judgmental Pharisees, were just fearful people, disregarding WordAlone’s many years of trying to be respectful, loving, loyal opposition. Exclusion was hurled in our faces.

Yes, we are fearful but not of the assembly, not of the votes, not of the leadership. We have to and do fear God, Our Father and Our Lord and Savior, Jesus Christ in the true sense of fear of the Lord and the wisdom that it ushers in.

For years we have prayed for clarity. We have it. According to National Public Radio, the tornado came out of nowhere. On the other side of the street from the Minneapolis Convention Center, the cross on top of Central Lutheran was bent toward the ground and tents and tables were turned over.

The very roof at the other end of the convention center from where the assembly would soon vote was damaged.

At an accelerating pace, the assembly moved forward, cut debate, refused to hear more amendments—especially ones on homosexual behavior or cohabitation—and rejected attempts to speak the Word from the floor of the assembly. The votes were punched into electronic handhelds and the results came up on the screen.

The numbers could not be denied. The statement on human sexuality passed by one vote bringing the percentage to a number not unknown to those who read their Bibles—66.67.

God, Almighty Maker of Heaven and Earth and Father of our one Lord, Jesus Christ, will not be mocked.

The writing has been on the wall for quite some time. WordAlone hears the call to witness obediently that God is not doing a new thing with sexuality, not trading the natural for the unnatural, not directing his church to act against His created order nor un-sinning sin or blessing it.

God is doing a new thing in this enlightened, post-modern, rational scientific culture that has denied his power for much too long, forgotten the reality of God’s wrath and usurped His authority. We could learn from the Ethiopians and other African Christians, and Christians from other parts of the world, where they haven’t decided to regard God as mere divine spark, impotent and unable to intervene.

But many still do not revere or regard the signs and wonders.

I humbly thank God for His intervention and His witness to His power that has given great assurance to those of us fighting the good fight. It isn’t about us and our agenda; we are only called to tell the story and obey.

My response yesterday was to quote the hymn, “Built on a rock the church shall stand even when steeples are falling.” The rock of the church is God’s Word, not a social statement on sexuality.