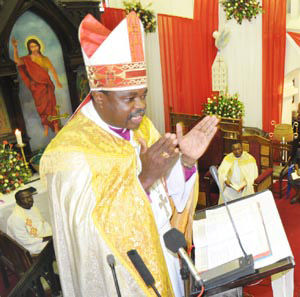 "Those in same sex marriages, and those who support the legitimacy of such marriage, shall not be invited to work in the ELCT,” a press release states. “We further reject their influence in any form, as well as their money and their support."

In addition the fastest-growing church in Africa with 5.3 million members said it “supports all those around the world who oppose churches that have taken the decision to legalize same-sex marriage.”

This loud warning was seen as a prelude to split from its main financial partner, the Evangelical Lutheran Church in America (ELCA), which now supports gay rights.

But those strong statements have toned down considerably since the head of the ELCT recently conferred with ELCA officials here.

“I hope there will be time to discuss it and see what we can do,” said Presiding Bishop Alex Malasusa in an exclusive interview from Tanzania. “We have been with ELCA for a long time, so we hope there will be room for discussion.”

In April there was no apparent room for discussion. The declarations from Tanzania were loud and clear. Now, asked directly if he will lead the ELCT out of ELCA he is not certain.

“Well I can’t say that,” Malasusa said. “As I say, I can’t really commit to anything.”

Last summer at their national convention in Minneapolis, the ELCA committed to supporting gay rights, when it narrowly voted to ordain practicing gay and lesbian ministers who are in a “committed relationship.”

The unexpected decision on August 21 threw traditional Lutherans into a state of shock and started an exodus from the largest American Lutheran body with 4.6 million members.

Many traditional-minded Lutherans in the US have left the ELCA and support others around the world who follow a traditional reading of the Bible.

“I fully applaud their decision (ELCT) to follow what God’s word says,” said Lois Carlson, of Grantsburg, Wis., who was born to medical missionaries in Tanzania, is the wife of a retired Lutheran pastor and has left the ELCA over the controversial issue. “Their stand is certainly based on Scripture.”

The head of the ELCT once expressed support of this US exodus in his last Easter sermon. He said gay-rights advocates had gone astray from the Bible, and it was up to Africa to get them back on the straight and narrow.

“It's time Africa preached to the rest of the world, and remind them of God's word,” Malasusa is quoted saying in The Citizen newspaper in Tanzania.

And the bishop warned this scriptural mission will have a cost.

But Malasusa is now walking back his unequivocal stance since his trip to America, where he openly visited ELCA synods and then met with church officials in Chicago behind closed doors.

Church officials characterized the meetings as “confidential” and declined to shed any light on them.

"We believe that concerns are best worked out through church-to-church relationships rather than through public statements," ELCA Presiding Bishop Mark Hanson is quoted by the ELCA News Service.

The two bishops, and other church heads, will again meet at the Lutheran World Federation meeting in Stuttgart, Germany in July.

But for now, Malasusa is no longer saying Africa will lead the fight against those who “do all they can to destroy one Biblical passage after another in order to legalize homosexuality.”

He now says, “It’s not our duty to do that.” Adding, “we are not forcing anybody to follow us.”

After the May 28 exclusive interview, the bishop and his secretary general further declined to answer any subsequent phone calls or emails.

His last statement was, “I think you can contact Bishop Mark Hanson and he will tell you what we have discussed.”

An interview was requested with the head of the ELCA.

“As for your request, I wish I had better news,” said John Brooks, director of ELCA News Service. “Bishop Hanson declined to be interviewed.”

The Tanzanian bishop also said his Easter sermon containing unwavering statements was reported out of context. However, the newspaper reporter stands by his story.

“It's true,” said Mkinga Mkinga, in an email. “That was his statement, and it was a news headline in Tanzania!”

“The problem I can see here is, that the matter has involved financial assistance from countries that supports homosexuality,” he said.

The ELCA is a major contributor to the ELCT. For the fiscal year of 2009 the ELCA gave $1,073,966 to their African global partner.

“This figure does not include any direct support…from ELCA synods, congregations, individuals, or other Lutheran organizations,” Brooks said in an email.

The ELCT greatly depends on the financial contributions, missionaries, doctors and other personnel from the ELCA. This sizeable support admittedly can be an influence.

“Yes. And that is always the struggle when we work with developing countries,” said Rev. Thomas Skrenes, bishop of the Northern Great Lakes Synod and a long-time friend of Malasusa.

Skrenes, who voted against ordaining practicing homosexuals at the convention because “the case had not been made biblically or theologically,” said Tanzanians have the “right to come to their own conclusions…and we respect that. They won’t see money as a manipulator. We can’t do that. That would be wrong.”

But Bishop Skrenes said the practice of ordaining homosexual ministers will not likely split the two churches.

“No, we are hopeful…even confident that we can work together with our brothers and sisters in Tanzania and other places who hold a different position.”

But not all Lutheran pastors see it that way.

“There’s no basis in the word (Scripture) for compromising or changing or softening one’s position,” said Rev. Jaynan Clark, president of Word Alone Ministries, an organization assisting congregations to leave the ELCA.

And she is suspect on the influence and motivation.

“I can’t see how anything but the money could be influencing their position,” said Clark.

As a former ELCA missionary to Tanzania, she warns against taking “any blood money and not to compromise their position.”

Of the 70 million Lutherans worldwide, many traditionalists expressed optimism when Malasusa posted his clarion call to return to “God’s word.” Some said it was like when founder Martin Luther nailed his 95 Thesis to the church door.

But for whatever reason, Malasusa’s once Luther-like unwavering stance is now on the way to a table of compromise, where it all began in Germany.

(Wayne Anderson is a freelance journalist based in Wisconsin. His Web site is: www.theandersonreport.com.)